This post contains a PHET model of molecular bond polarities including dipole, charge density and electronegativity. WE discuss diploes, dipole moments, hydrogen bonds, and the effect of dipole moment on boiling point. 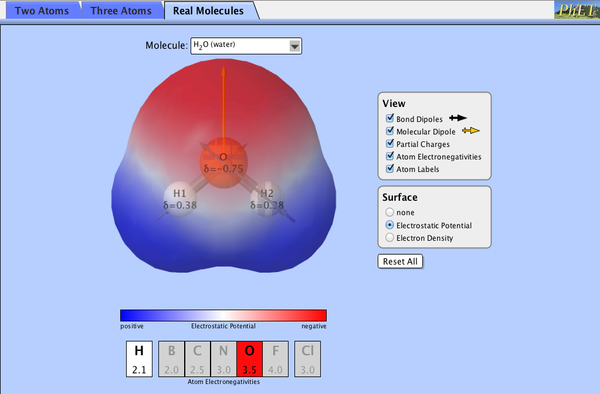 What are the different types of molecular polarity? pg 372-374

Conclusion:  The Hydrogen Bond is a common form of Dipole-Dipole Interaction.

So why are dipole interactions and Hydrogen Bonds important?

Charge-Dipole Forces:
An uncharged molecule can still have an electric dipole moment. Electric Dipoles arise from opposite but equal charges separated by a distance. Molecules that possess a dipole moment are called Polar molecules (remember the polar covalent bond?). Water is polar and has a dipole moment of 1.85 Debye. The Debye is a unit of dipole moment and has a value of 3.336 x 10^-30 Coulomb meter.
When salt is dissolved in water, the ions of the salt dissociate from each other and associate with the dipole of the water molecules. This results in a solution called an Electrolyte.

Salt is NaCl.
Which ions are Na? Which are Cl?
Explain how water molecules can be attracted to and surround both Na and Cl ions.
Dipole-Dipole Forces
Dipole-Dipole forces exist between neutral polar molecules. Think of a dipole as an arrow with its tail at the – (negative) charged part of the molecule and the arrows tip is at the + (positive) part of the molecule. The “dipole moment” is a measure of the electrical strength of the dipole. The unit of dipole moment is a Debye (named after the scientist who discovered the effect).
The following diagram shows dipoles and dipole attraction of polar molecules in gas, liquid and solid phase.

Why does Acetaldehyde have a higher boiling point than Propane?

London Dispersion Forces: The weakest and most temporary of all the intermolecular forces: